The Gloucestershire Old Spot or Orchard Pig has been around for about 200 years. It originally came from the Severn Valley where they were kept in orchards and raised on windfall apples. It used to be said that the dark marks on the pigs were bruises where the apples fell on to them. 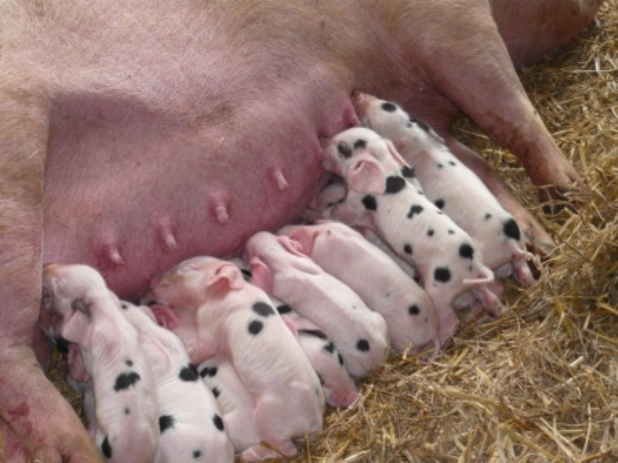 A sow with lots of hungry spotty piglets feeding

The Gloucester was a popular pig during the 1920′s and 1930′s but then it fell from favour as the more modern, faster maturing breeds took over. In a 1994 survey stated that there were only 158 sows and 60 boars left in Britain.

The Gloucester is a white pig with some black spots (is is not as spotty as it used to be). It is large with lop ears and very hard coarse hair. This pig does not dig as much as other breeds like the Berkshire, hence it’s use in grazing orchards. The Gloucester can adapt to extremes of weather from high humidity to very cold; ideally suitable for the British climate.