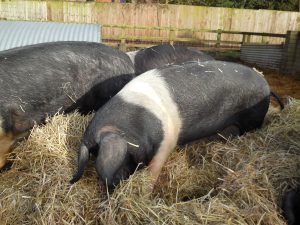 The British Saddleback is the result of the amalgamation of two similar breeds, the Essex and Wessex Saddleback.

The Essex pig was mainly found in East Anglia. This pig had a black head and neck, as well as a clearly defined belt of white extending over the shoulders and continuing over the forelegs. The rest of the body was black with the exception of white feet and the tip of the tail.

The Wessex originated in the New Forest as a cross between two indigenous old English bacon pigs. By 1914 the breed was also found in the South and South West. It was black all over, asides from a continuous belt of white hair over the forelegs and shoulder. The breed prided itself on having resisted the trend to introduce Chinese blood.

The respective breed societies amalgamated in 1918 and the herd books followed suit in 1967 when the British Saddleback breed was established.

British Saddlebacks are hardy and noted for their mothering ability. The breed continues to be used mainly to provide coloured dams for the production of first-cross porkers, baconers and heavy pigs. The breed is known for its grazing ability and is very hardy. It has secured a niche in outdoor and organic production.